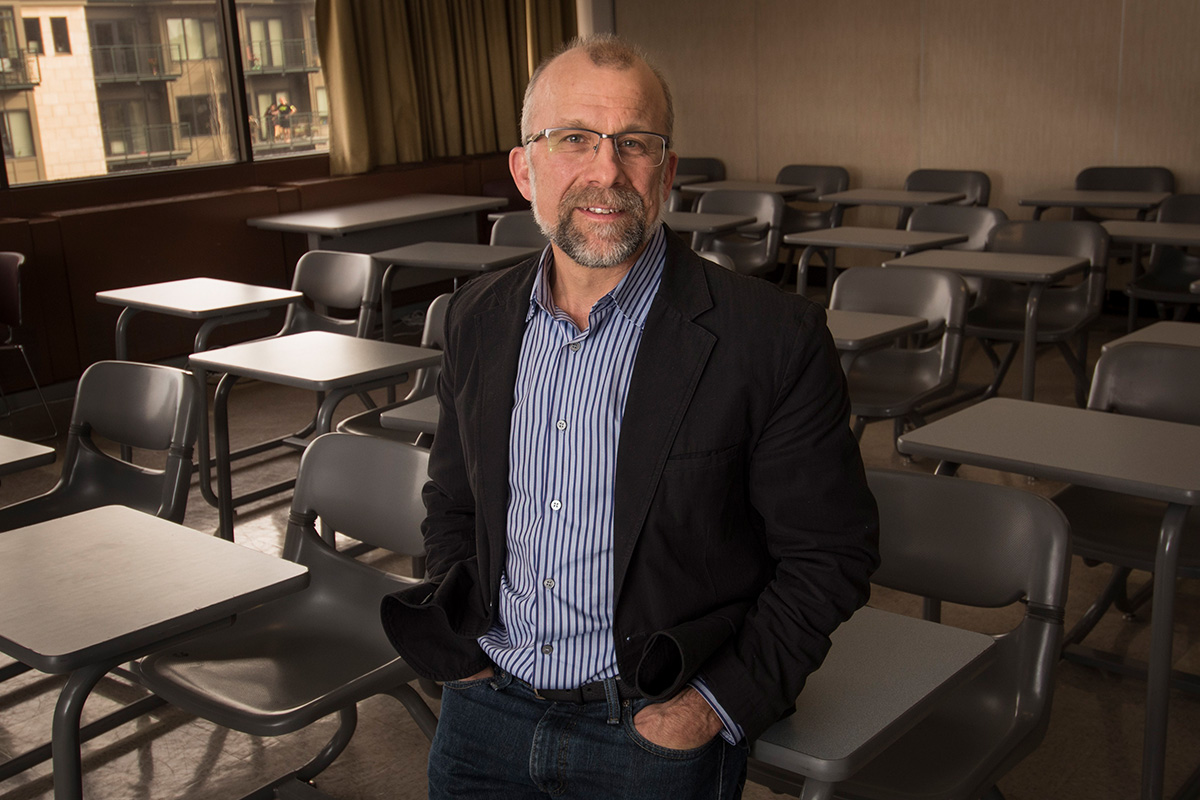 English instructor Jeb Wyman encourages his students to use storytelling to develop their writing and explore themselves.

Great teaching is all about listening. That’s the principle English instructor Jeb Wyman uses to structure his classes, where he encourages students to articulate their thoughts, feelings and hopes. In this way, his students become better writers and communicators, but they also build confidence in themselves, which helps them put their dreams into action.

"It’s no accident that I have students share stories about their lives in their assignments," Jeb said. "Stories are how we learn about the world. It’s the only way we can make sense of our chaos. My job is to help students develop as writers so that they can make better sense of their lives on paper."

Jeb caught the “teaching gene” from his grandparents, who were both teachers. His career path, however, didn’t fully form until after he graduated from college and spent some years wandering. After leaving a demanding job in the fishing industry, he earned a master’s degree from Western Washington University and made a living as a journalist, where he refined his ability to develop nonfiction narratives.

Jeb describes his role as a listener and a teacher as a "sacred responsibility." When he came to Seattle Central, his experience as a reporter helped him teach his students how to research and tell compelling stories. He equips his students with the skills to put their dreams and stories to work so they can better understand themselves. To do that, he assigns readings of memoirs by other writers and analyze their approaches. He also encourages students to collaborate in groups and read their stories to each another.

"It is very empowering for students to see a peer respond to what they have written," Jeb said.

"What They Signed Up For"

During one of his classes, a student shared a painful story about the trauma he suffered as a veteran of the Iraq war, and his struggle to cope. The experience moved Jeb to apply for a sabbatical to write a book about soldiers who have had similar difficult experiences. Over the past year, he has researched Post-Traumatic Stress Disorder (PTSD) and interviewed student veterans around the region. He recently presented at Seattle’s Town Hall about his upcoming book, "What They Signed Up For."

In addition to the book, he is also working to integrate his findings into classes at Seattle Central. A writing curriculum for veterans he is developing will help them process their emotions by sharing their stories.

"When people experience PTSD, they are responding to emotions that they cannot yet process. Telling stories that they often keep buried is a kind of therapy. It helps them process those feelings and memories," Jeb said.